After acting in a successful Friday night performance of Invisible Chains as part of the first ever TheatreFest 15, a five-year project to promote original theatre in the Isle of Man, my inner thespian was re-awakened and I decided that I wouldn’t wait another two years to act again.

TheatreFest was incredible, not only for the originality of the three shows: Invisible Chains, a devised project revealing all aspects of slavery; For Tonight, a musical showcase about a Welsh boy and his Romani lover, and finally Jimmy Mac, a comedy musical written by Stuart Brayson about a nympho playboy whose fate is decided by the four women he’s wooed – or should I say, Mac-d.

Me and the Invisible Chains crew went to see it, and it was brill. Considering the cast only had six days to rehearse, made up of two Manxies, Michelle Jamieson (one woman show, as she was in all three!) and Kristine Sutcliffe, who was also stage manager, and two Scots – Erin Caldwell of Glasgow and Simon Gordon, aka Dundee’s Messiah (he auditioned for Andrew Lloyd Webber’s Jesus Christ Superstar on ITV’s Superstar.)

Seeing as I’m trying to utilise my journalism degree and maybe, I hope, someone will read it and I’ll no longer have to pay myself with Tunnock’s Tea Cakes, I thought I’d ask Simon if he’d be willing to be interviewed. Being Scottish, a good trait to have, he said yes.

I managed to snag a conference room in the hotel, no bribery involved just a “is there somewhere quiet for an interview?” and it was sorted. Simon had some cheese sandwiches, which he said were “sublime” (Manx cheese is the best, of course). Friendly, very chilled with a soft Dundee accent, 25 year old Simon was cool as a cucumber and it was as if the kids party next door behind his head wasn’t audible, he was happy enough to chat to me on his first night off in a week.

H: How do you think tonight’s show went?

Simon: (mid-munch) It went really, really well. There’s a lot, if we did it again, that I would have done better, but that’s only natural with only having six days, to learn it and rehearse it. And I think what we actually achieved was pretty brilliant. It gave Stuart a chance to see his material on its feet and performed. So, yeah, I think it went really well.

H: How have you found your time here on the Island?

S: Amazing. After about three days, we all said that we would want to live here.

S: Yeah, it is cold, but the first couple of days here, the weather was amazing. And that front out there, that monument that you’ve got, we were getting a bit of history from Michael. It’s beautiful, amazing.

H: Aw, thanks. So not everyone has just six days to rehearse an entire musical. What would you say this experience in Jimmy Mac has prepared you for in the future?

S: (pause) Wow. Well, funnily enough, today, I’ve been thinking how well Nigel has directed it. If I was the director, I just wouldn’t have known where to start. I would have had to have started somewhere, but I just would have no idea where that would be. From that point of view, it’s prepared me in that I’ve learnt a lot from working with Nigel. It’s definitely prepared me for getting thrown things at the last minute. The amount of material I had to learn was pretty incredible, it was a lot to learn, and I still don’t know if the rhyming couplet thing helped me learning it or hindered me learning it.

H: I think it sounded great!

S: – Well, I loved doing it, but I don’t know if the fact that it rhymed helped it go into my memory, or if it would have been easier if it didn’t rhyme. Who knows? But it went in there somehow. Most of it, anyway!

H: What’s next for you? Is this show going to tour?

S: Stuart is very keen on it touring. I know that Tony is, too, the producer. I think what Stuart really wants to do is get it recorded. He said that Tim Rice wanted to hear the cast recording … see the book. So he’s really keen to work with Stuart again. It’d be great if it was this one. I think a tour would be awesome. I also think that it would go down really well at the Edinburgh Fringe. We’d only need six days to rehearse it, it’d be great! A really nice thought, actually.

H: What’s been your favourite part of the process?

S: My favourite part of the process was definitely just playing the role of Jimmy Mac. It’s kind of every little boy’s dream to play someone like him. Nigel just goes with whatever you do. You know, I would just throw stuff in and improvise, and there’s a lot of directors who would be really annoyed and some would say “Why are you doing that?” But Nigel feeds off of it, we bounced off each other. Nigel’s just amazing, if he can work it in then he’ll let you do it. The cast were just bouncing off of each other as well, we worked so well together.

H: You had a guitar at one point in the show, and you said that you would have actually played it if you’d had more time to rehearse. Are you a musician as well?

S: Yeah, I’m a guitarist, living in London, and I play gigs. Everyone has a guitar, don’t they? It’s kind of like an impromptu thing. If I’m at a pub, or an acoustic night and someone asks me to play a song, then I’ll usually get up and play.

H: So do you write your own stuff?

S: Yeah. No one’s ever heard it. (laughs) But, yeah, I write loads of stuff, funnily enough- I’m going to record an album with Tony. Stuart has bags and bags of material, and after the King Pit show in Newcastle, another of Stuart’s shows, we decided to record an album. We’re going through Stuart’s material and trying to decide what would suit my voice best, and try to bring something to it. Hopefully that’ll happen soon and I’ll definitely get a bit of guitar on that.

H: What kind of style do you go for, mainly acoustic or anything edgy?

S: It depends what I’m doing, cause in the show today, we were singing through some material during rehearsal in this room, and Stuart came over to me and said “Do that Michael Buble thing you can do with your voice!” So I did it and he said “Oh, that totally works for that song!” Other numbers were a bit more pop-y, and I loved it cause it’s so varied. I got to rock out as well, ‘This Time’ is such a great song.

H: I thought the song when you were wearing the star suit was really good, as it was a very quiet, unexpectedly stripped-back song and Jimmy’s always acting like the macho, playboy. So, that was great to see an unexpected side to him.

H: Speaking of stars, you were in ‘Superstar’ …

H: So since that time, as you’re only 25, how does it feel to be doing what you love at your age?

S: It’s incredible. I feel very lucky, I just have to hope it continues. I’ve worked for three years and I’ve worked with some amazingly talented friends who are unemployed now. It’s this industry, it’s not all about talent. If you have talent, then that’s gonna help you to get work, but there’s just so many things it comes down to. Talent is just a box on a massive list of boxes that you have to fill. And, actually, talent isn’t even a box you have to fill sometimes. Sometimes, it’s being on X Factor, having a good story. You might not have even had to have acted before in your life. I just feel so lucky to be able to be in a show like this, that’s brand new. That’s probably my favourite thing about the experience, having the chance to create something completely new – you can’t do that with a musical that’s already been performed. When I was Danny in Grease, I was taught the Walk, and everyone knows Danny. I loved playing him, but it’s a blessing to be able to interpret a character in your own way and no one can take it away from you. You are the original cast. 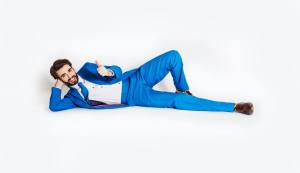 H: What’s it been like performing with all four girls?

S: Aw, if it went to tour, it’d be great cause I loved performing with every single one of them. I was really surprised. Krissy was doing everything, even stage management stuff. I don’t know how she did that. And Michelle, she is one to watch. She’s so professional.

H: So Jimmy Mac’s had a good experience in the Isle of Man?

S: Aw, yeah, definitely! I not only hope that I can do Jimmy Mac again, I hope that we can come back to the Isle of Man. I really want to. And the Gaiety is just one of the most beautiful theatres. You’re all very lucky to have that here.

H: Were any of your family or friends here tonight?

S: No, but it’s my gran’s 90th birthday and she said “For my birthday, I want tickets to come to the Isle of Man.” And I was like “No, gran, it’s your day, back home!” She’s having a big party tomorrow with about 60 guests!

H: Aw, we would have shown her a good time here!

S: Well, her party’s at 1 o’clock in the afternoon…having a little high tea I imagine. So, I’ll fly back tomorrow and go and see her and get my piece of cake cause, obviously, that’s really why I’m flying back.

H: The most important part! Anything you’d like to add Jimmy Mac?

S: I just couldn’t have asked for a better team and the audience were amazing. That’s so important as well especially with comedy. You have to test it out and they say that in comedy, the key is knowing your audience. I said to the cast, if we don’t get any laughs, it’s not the end of the world. We will get some, cause it’s a comedy, it’s just like a comedian testing his material. You just have to find out what works and what doesn’t.

S: Yeah, I was pleasantly surprised. I had a lot of faith in Stuart’s material but he’s a very ballsy writer.

Rants from a 23 year old going on about music, film, books and various other things which may be of interest